Since SEMA 2014, we have all fallen in love with Borg Warner's factory-built SXE Billet (FMW) Wheel and 360 degree thrust bearing kits.  Here at AGP, we've decided to offer up the perfect divided turbine housing specific to the 5.9 Cummins 12V and 24V (2nd Gen).  We offer both a 14cm (.80 A/R) housing conjoined with all the different compressor and turbine configurations.  We custom machine the outlet of the compressor cover to mate up with your factory boost elbow, and the turbine outlet flange is your industry standard HX40.

--UPDATE 10/1/17-- We have decided to include a turbo just smaller than the 62-68 for those guys needing every little bit of spoolup and low RPM cleanup as possible.  For high elevation and / or manual transmissions, this 61-65 fills that void between the S300G and the 62-68.  We have dubbed the 61-65 as the newest smallest turbo in the SXE lineup.  This slightly smaller turbine wheel will aid spoolup by 100-150 RPM and only slightly restrict airflow above 3000rpm.  This 61-65 incorporates the Billet (FMW) wheel and the 360 degree thrust bearing.  Unfortunately the cost and labor involved with this combination equals a slightly higher price tag, but for those who really need it, it's now available.

Turbo will come complete with 3/8" Inverted Flare oil feed fitting, divided turbine inlet gasket, and oil drain gasket.  You will need an HX40 style downpipe which is all over the internet for around $100 shipped.  If you prefer to make your downpipe, we sell our flange and clamp kit here.

Simply put, a wastegate on a diesel opens to control turbine speed and drive pressure. When the wastegate opens and it relieves that drive pressure, it also slows down the turbine wheel thus creating less compressor flow. When you decrease the compressor flow of the turbo, you are decreasing the amount of air that is flowing through the engine. If you are still commanding and delivering the same amount of fuel, you are now going to have more fuel than air when the wastegate is opened. When you have more fuel than air, your EGTs rise. The only way to decrease your EGTs, is to decrease fuel OR increase airflow. Having a non wastegated turbo will give you the amount of boost that the delivered fuel needs to sustain a usable EGT.

“But I want a wastegated turbo so I don’t overboost, what do you say about that?” Well, the answer to overboosting a single turbo is the fact you have too much fuel. If you are running a single S300 turbo and you’re running more than 50psi, you should be running a compound setup, or you should turn your fuel down. Wastegating the turbo to run less boost at that same fuel delivery is not the answer. The only thing that will happen if you wastegate the turbo in that scenario is high EGTs.

There are situations and systems that may benefit from a wastegated turbo, however for 9/10 customers, a non gated turbo is the simple answer. If you have head studs, which you likely do if you’ve done fuel modifications to your pump or larger injectors, then a non gated turbo is easy. We’ve matched these housings and combinations so they work very well on the 5.9 and 6.7 applications. 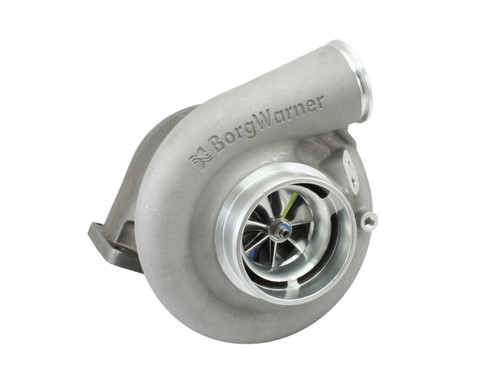